A few days ago while uploading an image to my Facebook Portfolio I noticed that the size reduction after compression was not as severe as in the past. To see what had changed, I downloaded the image into Photoshop to check it’s size after being run through Facebook’s “NEW” photo algorithm and ,to my amazement,  I immediately found a 20% increase in the size of the image. In the past, photographs would be reduced to a max “long edge” length of 604px but now the image was a whopping 720px.

To test the image quality at the new format and brought the original image back into Photoshop, reduced to 720px, optimized and re-uploaded. Once done I repeated the above and downloaded the new, Facebook converted, image into Photoshop and found it remained 720px on it’s “long edge” and amazingly kept all of it’s optimized detail with absolutely no perceived image degradation!

I tweeted about my accidental find last night and thought that other photographers whom use Facebook to show off their work would benefit by re-optimizing their images with the new Facebook Image Algorithm in mind and resubmitting!

Too me, the extra 116px [ 20% larger ] image size makes all the difference in the world. Things that were to small to be viewable in the past are now absolutely clear with no noticeable artifacting.

3 cheers goes out to Facebook for listening to all of the photographers, graphics designers and creatives whom have ask for larger and clean images!

Now it’s nose to the grind stone to re-optimize all images and re-upload! 🙂

My only question for Facebook or anyone “in the know” would be: “Can we upload replacement optimized 720px images while keeping comments?”

Here is an example of how much 20% actually is in real world term from an actual Facebook image: 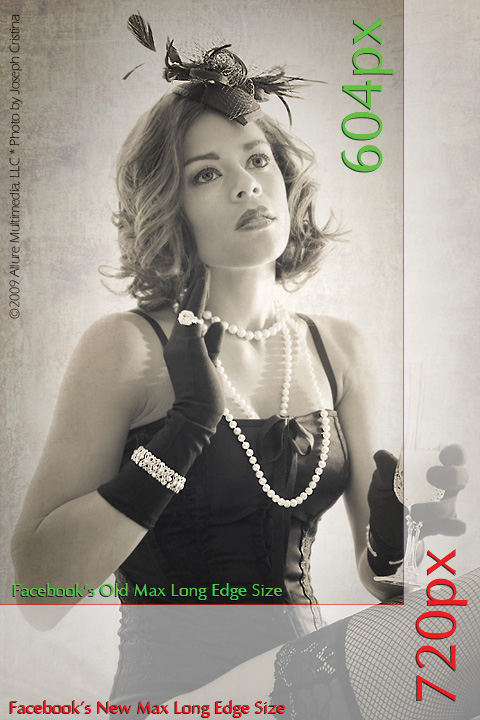 Please take a moment to comment below and retweet this article if you find it useful!

2 thoughts on “Facebook gives back 20% to the photo community!”